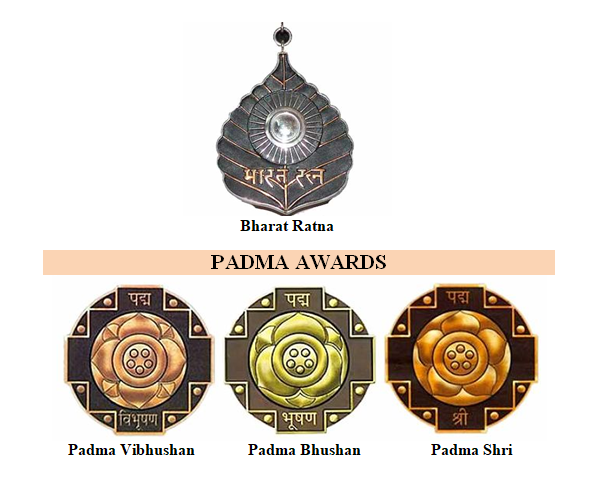 Bharat Ratna Award is the highest civilian award of the Republic of India, followed by Padma Vibhushan, Padma Bhushan and Padma Shri Awards. A brief account of various Padma awards and list of Padma Award recipients from Nagaland are listed below for reference.

The Bharat Ratna is the highest civilian award of the Republic of India. Instituted on 2 January 1954, the award is conferred in recognition of exceptional service/performance of the highest order, without distinction of race, occupation, position, or sex.

The award was originally limited to achievements in the arts, literature, science, and public services, but the government expanded the criteria to include “any field of human endeavour” in December 2011

The Padma Vibhushan is the second-highest civilian award of the Republic of India, after the Bharat Ratna. Instituted on 2 January 1954, the award is given for “exceptional and distinguished service“, without distinction of race, occupation, position, or sex.

The Padma Bhushan is the third-highest civilian award in the Republic of India. Instituted on 2 January 1954, the award is given for “distinguished service of a high order…without distinction of race, occupation, position or sex.”  The award criteria include “service in any field including service rendered by Government servants” including doctors and scientists, but exclude those working with the public sector undertakings.

Padma Shri, also spelt Padma Shree, is the fourth-highest civilian award in the Republic of India. Padma Awards were instituted in 1954 to be awarded to citizens of India in recognition of their distinguished contribution in various spheres of activity including the arts, education, industry, literature, science, sports, medicine, social service and public affairs. It has also been awarded to some distinguished individuals who were not citizens of India but did contribute in various ways to India.

* Shri.Thepfürüya Haralu (T Haralu) listed at S.No. 1 above was a Padma Shri recipient in the field of ‘Civil Service’ way back in 1964. For some reason, he is listed under Andhra Pradesh in the MHA’s Padma Award dashboard , and not under Nagaland.

Shri.Thepfürüya Haralu is the first Padma Award recipient from Nagaland.